​do not have any Japanese Shiba Inu puppies currently available.
While we do have litters planned for the near future, we currently have a waiting list for Shiba Inu puppies. We do not breed very often, and when we do it is because we want a puppy to keep for ourselves. If you are interested in offering a Lacsar puppy it's forever home and are willing to wait, please feel free to contact us and we will consider adding you to our non-commitment waiting list. Please do not contact us if you are not willing to wait for a puppy.

Dogs were Emer's passion in life from a very young age. As a child, she showed her family's Shetland Sheepdogs at agricultural and open show level before first competing at a Championship show in July 2012. Later that year, Emer got her first Shiba Inu, 'Yogi'. By December 2013, 'Yogi' had quickly gained his Irish Champion title, making him the first Lacsar Champion. Since then Emer has handled multiple dogs, owned by both herself and others, to both their Irish and International Champion titles, winning various other titles, awards and Group Wins and Placings along the way. Currently Emer is the OurDogs Ireland Junior Handling Correspondent and since December 2017, she has been Secretary of the Junior Handler's Association of Ireland, an association which is very close to her heart. Emer also holds an Irish Kennel Club Judge's Licence and is qualified to judge Junior Handling Classes at All Breed Championship Shows.
Emer has experience handling various breeds across all 10 FCI groups. She is available to handle at the majority of All Breed Championship Shows in Ireland, as well as at some Open Shows in Ireland, and selected Championship shows in the UK and mainland Europe.
​Please contact me for more information by email at lacsarshowdogs@gmail.com
When Judge Mrs Sarah Matthews chose Emer as the Winner of the Irish Junior Handling Finals in 2015, she said... 'I was looking for gentle, effective and precise handling, no unnecessary dancing around the dog, but most of all I wanted to see handlers working with their dog to get the best out of them. My winner, Emer Wright, was handling a Shiba Inu, and really didn't put a foot wrong all day and did exactly as I asked her. Emer had such a lovely bond with her young Shiba and worked so well with her change of dog, a Bichon and again with a slightly uncooperative Siberian Husky in the final. She kept her cool and worked so well with the dog - exactly what I wanted to see. She focused on the dog throughout and her basic handling skills were precise which was what made her stand out for me. A judge some years ago told me in a handling competition that he looked for a handler he would be willing to let handle his own dogs - and I thought of this when I watched Emer handling. I'd like to wish her the very best of luck for the International Finals at Crufts and for the future.'
Some of Emer's other Junior Handling wins include:
On the 6th of December 2015 Emer won the Irish Junior Handling Finals with her Shiba 'Luna' (CH Steinark StarGazer at Lacsar CW16). The final was judged by ex-junior handler and Pembroke Corgi and Lhasa Apso breeder Mrs Sarah Matthews. By winning this prestigeous event, Emer qualified to represent Ireland, along with 45 other country representatives, in the International Junior Handling Finals which took place at Crufts 2016. This was an once in a lifetime opportunity and one which she thoroughly enjoyed. This win also qualified her to represent Ireland at the World Junior Handling Final in Moscow, Russia but unfortunately she could not attend. In August 2016, Emer wrapped up her Junior Handling career by representing Ireland once again at the European Junior Handling Finals at the European Dog Show in Brussels, Belgium. Another unforgettable experience. 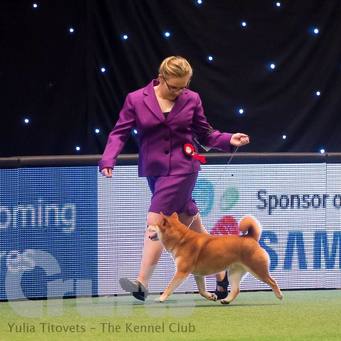 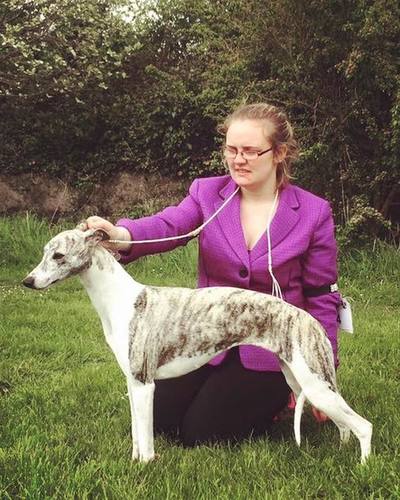 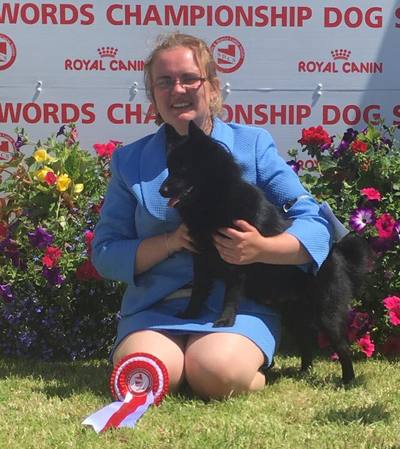 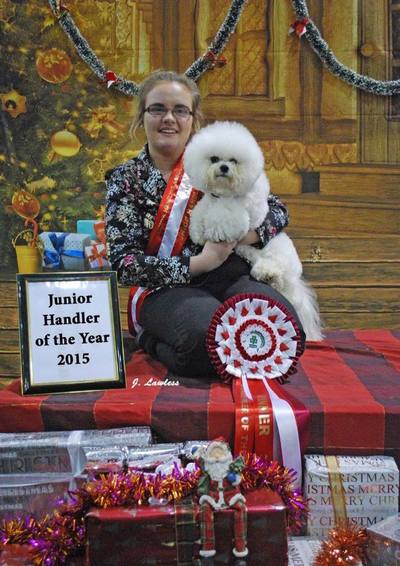 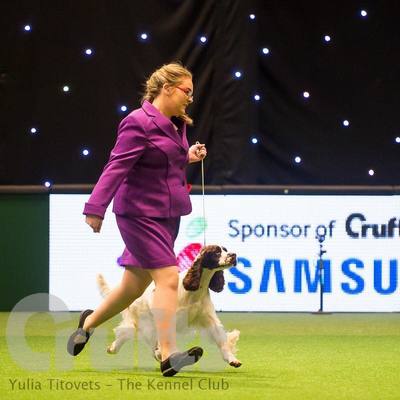 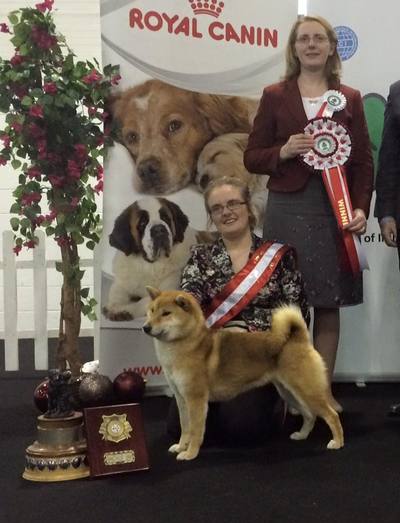 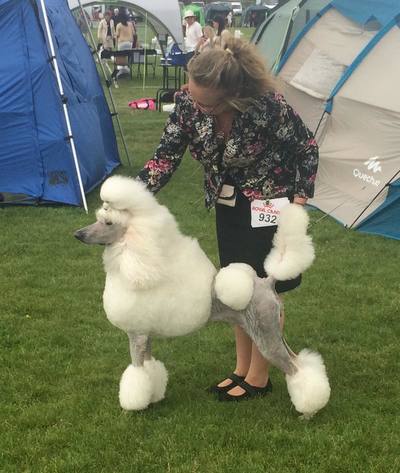 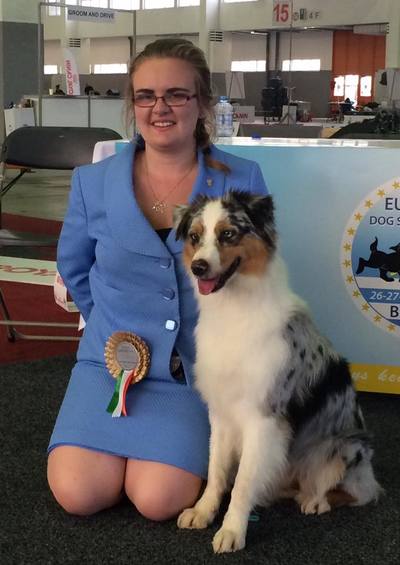 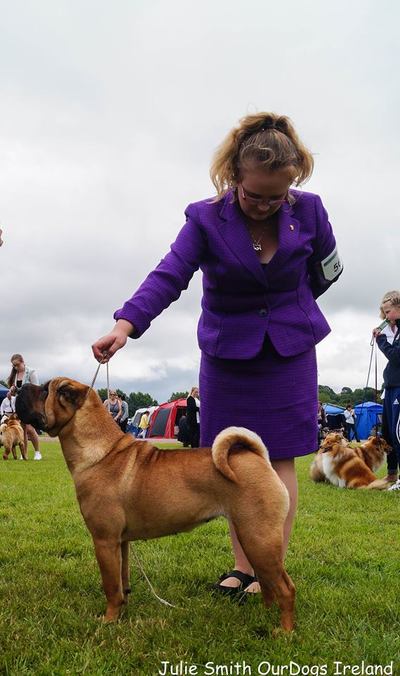 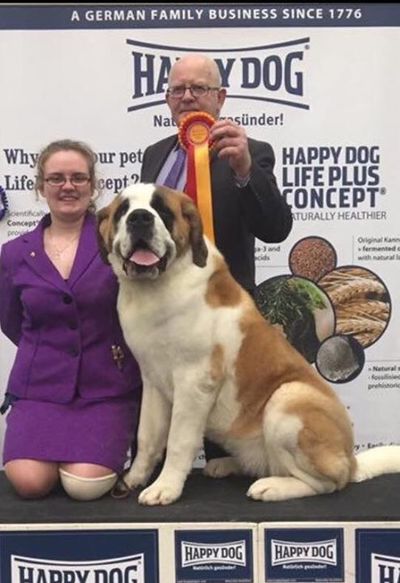 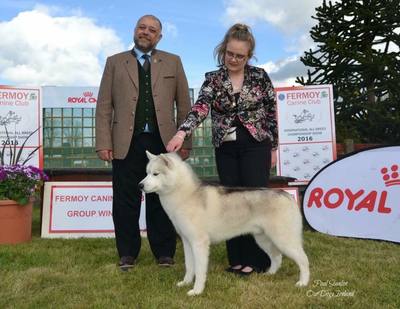 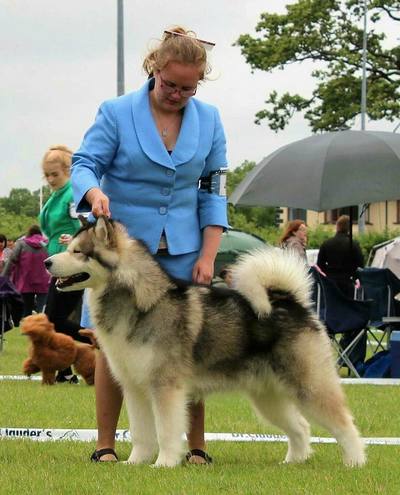 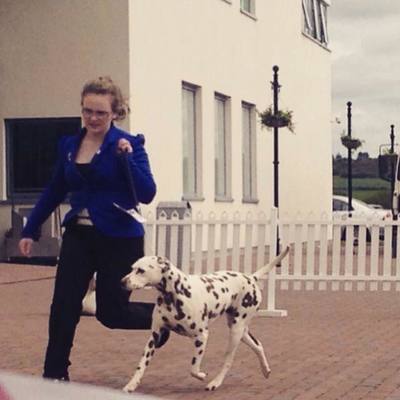 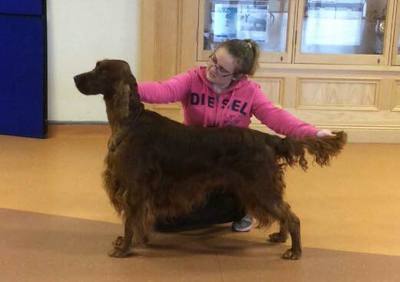 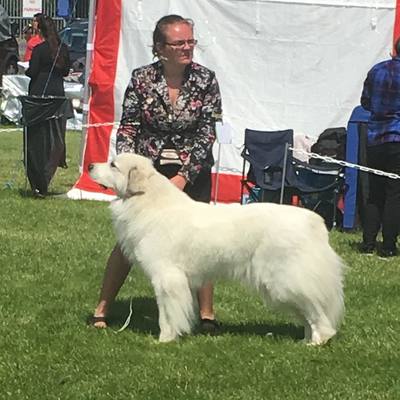 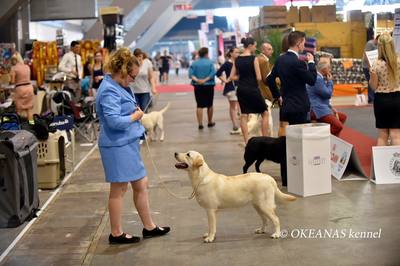 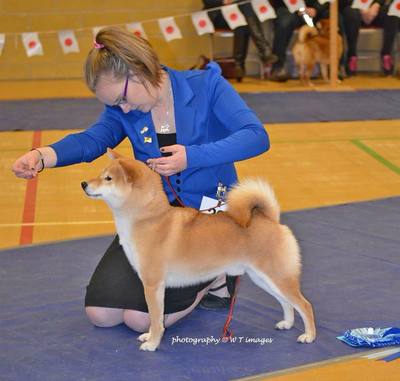 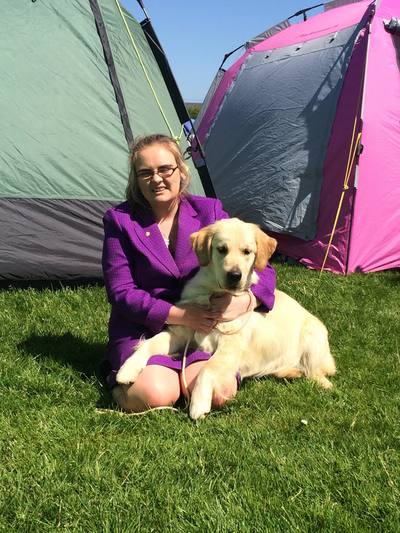 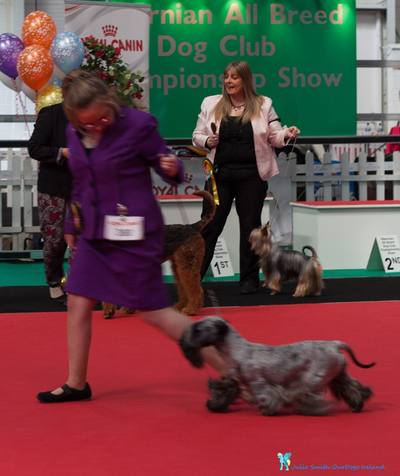 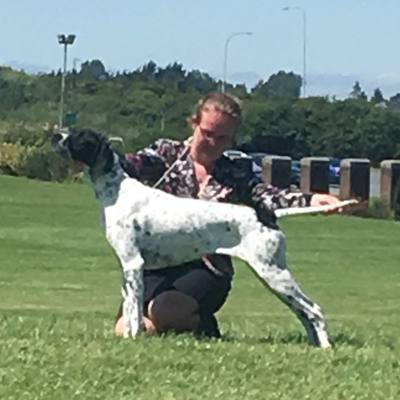 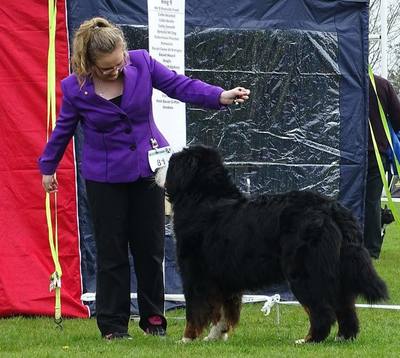 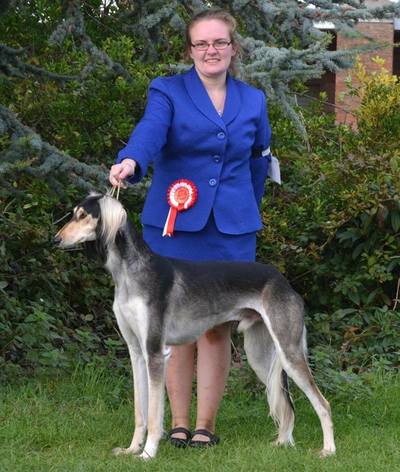 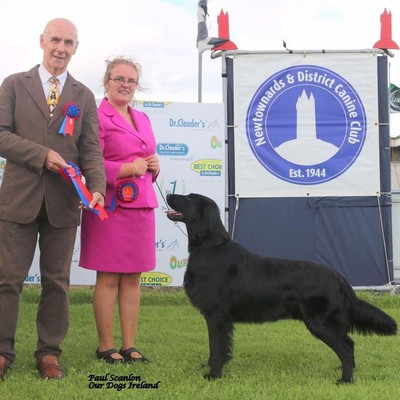 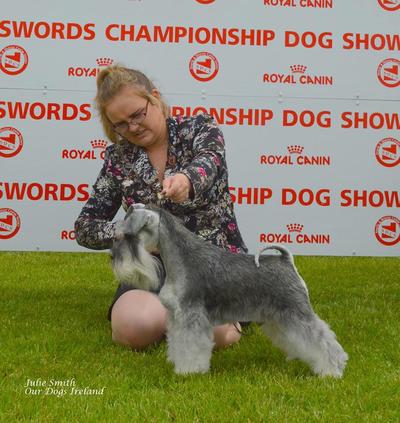 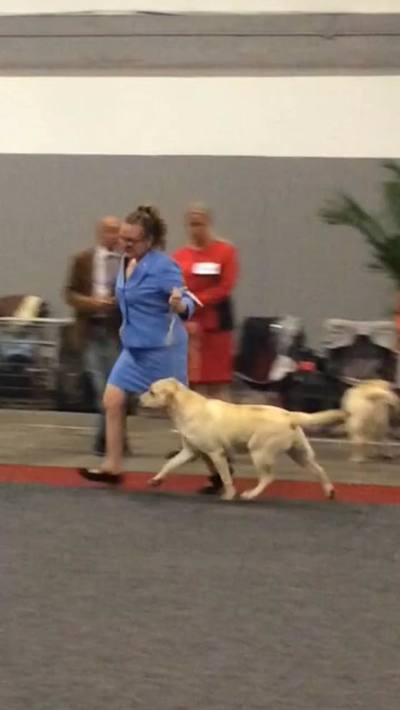 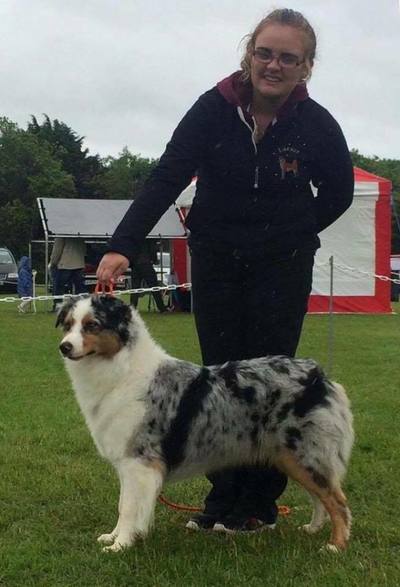 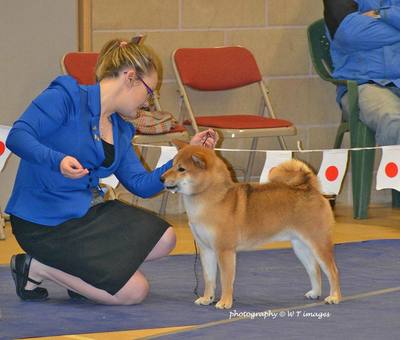 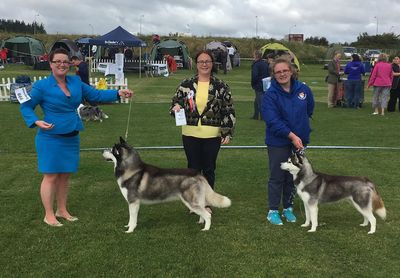 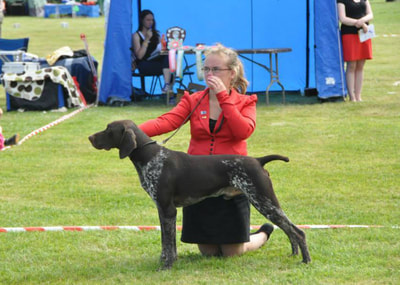 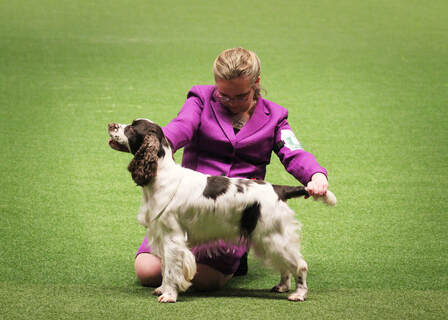